As soon as I arrived in Munich, my colleague whisked me away to the Hofbrauhaus for dinner. It was quite the “Welcome to Bavaria!” experience.

We found a place on the outdoor patio and were serenaded by singers lined up on the stairs and then by the band which marched through the tables before going to its traditional spot in the main hall. 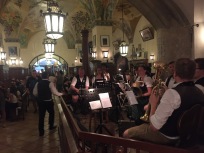 Hofbrauhaus was the King’s beer house. in 1844 there was a beer revolution as the beer tax kept getting higher and higher. There were a few more revolutions over the years as well.

In 1995 the government ruled that biergartens had to close at 1:00am. People boycotted and refused to leave for the weekend so the government gave in and got rid of the curfew.

Mozart was banned for starting a bar fight. Hitler was a regular here as well.

My colleague told me that there was a Airbrau at the airport so I made sure to make a visit on my way out of town! There is a nice outdoor patio as well. 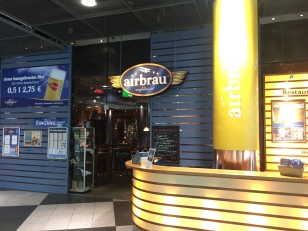